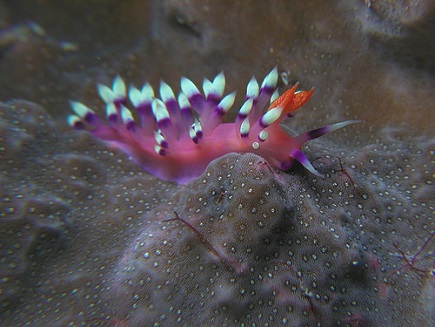 We were there in the Mola-Mola high season in August 2019. We haven't seen a single Mola Mola. We only saw sea snakes, baracudas, turtles, moray eels, lionfish and sea cucumbers. No sharks, no dolphins, no mantas. It was disappointing.

Went for a couple of dives in Nusa Penida (small island south of Bali) with Reeflex Divers and ended up staying for more. The dive center is super comfy, the staff is so friendly, the gear is spotless, guides are super pro / knowledgeable and finally the diving is great !!! I have been diving for a little while and Reeflex stood out so much that I felt like letting others know ;)

The trip was arranged to go in search of the Mola Mola (Sunfish). We were not disappointed!

The water temperature was between 17 and 22 degrees and a 5mm full length wet suit is a must! Most of the dives sites are within a 30 minutes bot ride, with Crystal Bay and Manta Point being almost an hour.

Currents are sometimes unpredictable pushing you up and down and side to side. Sometimes they are there, the next they are gone. The guides are very knowledgeable and you are made to feel very safe in their capable hands.

So, you need to pay attention to them.

The 2 busiest locations are Crystal Bay and Manta Point. This is due to the 80% chance of seeing Mola and Manta Rays.

Avoiding other groups can be a challenge therefore. At Crystal Bay, expect maybe 20 boats at any given time. At Manta about 10.

The experience is worth it when you do see the sights.

That said, we were fortunate to see a Mola at 12 metres (instead of the usual 22m) at dive site SD as we mad our ascent.

There are some unusual scorpion fish - albino! Lots of large shoals of trevally , baracuda and bamboo sharks can also be seen.

Very enjoyable overall, despite the cold. The currents are challenging and fun in the drifts.

The local area is relaxed and the accompanying islands are worth a visit for the views and beaches. Rent a car/ hire a driver if you go to Penida as very uneven and scooter travel can be treacherous.

Does any one have a good destination for diving in November in warm waters?

In Philippines, there are lots of Dive Site

Any recommendations for muck diving in Bali?